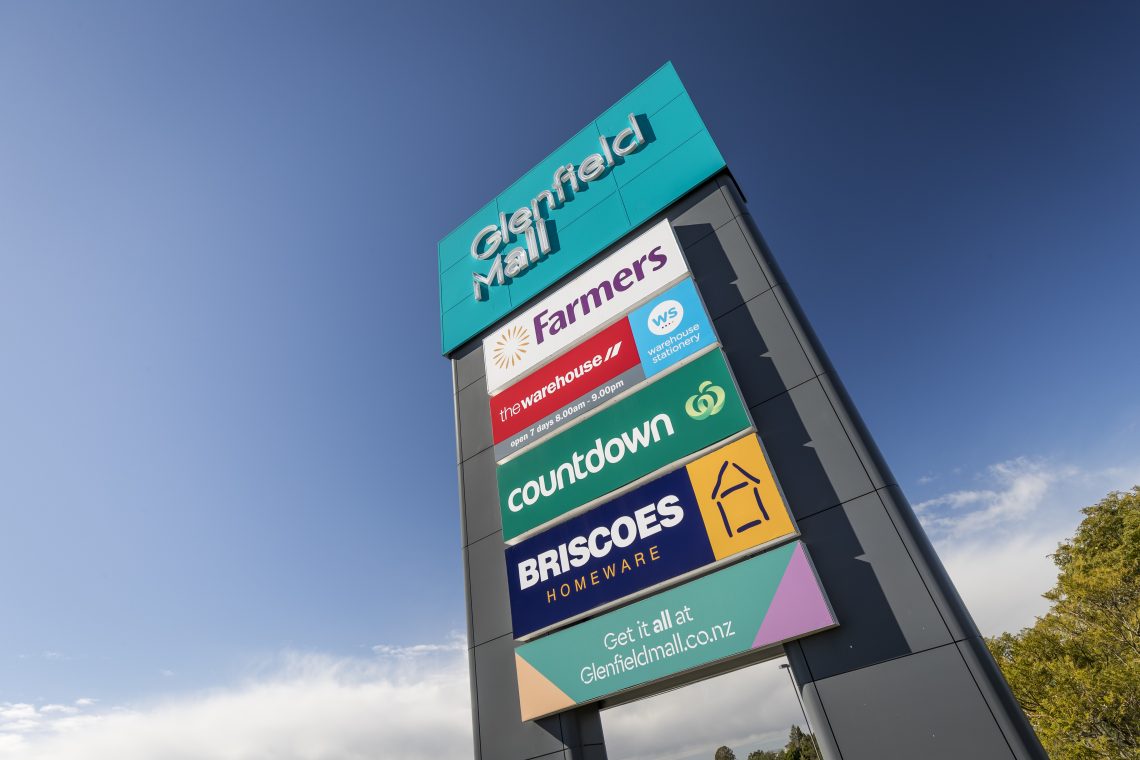 Located in the heart of Glenfield, on Auckland’s affluent North Shore, the recently refurbished centre of some 30,500 sq m of net lettable area sits on a prominent 4.5ha town centre site with long-term, mixed-use redevelopment potential.

Prominent national retailers Countdown, Briscoes, The Warehouse, Warehouse Stationery and Farmers anchor the centre alongside a vibrant complement of speciality shops, services and a significant food and beverage precinct.

Colliers International and Stonebridge Property Group are marketing Glenfield Mall for sale by way of international private treaty closing at 4pm on 31 October 2018.

“The centre has benefited from significant vendor and tenant investment, including the introduction of leading homeware retailer Briscoes and a major refurbishment of the large Countdown supermarket in late 2017.

“These changes have successfully repositioned the centre to generate a substantial uplift in sales productivity, ensuring Glenfield Mall is well placed to serve its affluent, growing community into the future.”

Located only 12km from Auckland’s city centre, Glenfield Mall draws upon a generous and multi-faceted total trade area of some 230,000 people which together with an estimated 17,000 workers at the Wairau Business Park, located 2km to the east of Glenfield Mall, contribute to the centre’s strong customer base.

In the longer term, investors also have the opportunity to capitalise on the site’s generous Business Town Centre zoning, which allows for the greatest density and height within suburban Auckland.

Investors have a significant opportunity to evolve the study into a comprehensive masterplan, while continuing to draw on the centre’s secure income stream.

Glenfield Mall is 98 per cent leased, with the potential to return an estimated net operating income over $10m on a fully leased basis.

The four anchor tenants are all on long leases with expiry dates ranging between May 2027 and October 2035. Collectively, they account for 28.6 per cent of the centre’s gross passing income.

A significant endorsement to the centre has recently arisen with the contractual commitment of 511 sq m for a new Cotton On Mega store. At the same time the owners were able to relocate the sitting tenants which effectively created 98% occupancy of the mall. The mega store concept is new to New Zealand and brings with it another large destination store of international quality.

Stonebridge Director, Carl Molony, anticipates substantial foreign investor interest as they will not want to miss the chance to acquire this premium regional shopping centre in Auckland’s fast-growing demographic.

“New Zealand is a highly sought-after investment location thanks to its strong economy and favourable foreign investment conditions, and for that reason is attracting worldwide interest,” says Molony.

“It is ranked second in the world for the competitiveness of its taxes, thanks in part to the lack of stamp duty. It is also the easiest country in the world to do business in, and the world’s third freest economy.”

“As New Zealand’s largest and fastest-growing city, Auckland is the country’s economic powerhouse, contributing to 37 per cent of the country’s GDP.

“Auckland’s population is forecast to grow by up to 66 per cent over the next 30 years, requiring the construction of some 400,000 new dwellings. Domestic and international migration remains a major contributor to this growth, particularly to Auckland.”

“As a result of these strong trading conditions, the retail vacancy rate in Auckland for shopping centres is a low 2.6 per cent.”

“Glenfield has been identified as a town centre under the Auckland Unitary Plan, cementing its position as one of Auckland’s key transport and housing hubs.

“At the heart of the town centre is Glenfield Mall, which occupies a prominent, elevated site with convenient access to three street frontages.

“A range of community amenities surround the site including a library, pool, leisure centre and childcare centre, which act as secondary patronage drivers for the precinct.”

Located on the corner of Downing Street, the shopping centre has excellent frontage to Glenfield Road, which connects the suburb with greater Auckland.

Herdson says it also benefits from superb connectivity to key arterials, including the Northern Motorway and Upper Harbour Highway.

It is only 18 minutes drive from the CBD, 16km from the Ports of Auckland, and 30km from Auckland International Airport.

Goddard says the five-level centre has been well designed to integrate the two main retail floors with car parking for some 1,553 vehicles over four levels.

“The lower retail floor on level two is anchored by a new 4,454 sq m Countdown at the northern end and Briscoes (3,306 sq m) at the southern end, supported by a service-based tenant mix including banks and health and beauty offerings.

“The main retail floor on level three is anchored by Farmers (5,052 sq m) at the eastern end, The Warehouse and Warehouse Stationery (5,211 sq m) at the southern end, and a 350-seat food court at the northern end. Other tenants include fashion and jewellery retailers.”

The recent leasings of Zambrero, Pizza Hut and Little Things Coffee to the upper level of the Mall (Level 5) being the main Glenfield Road entrance has resulted both in a complete upgrade of the area and a new vibrancy brought about by a largely food and beverage presence supporting the already successful food court below.

Originally built in 1971, the centre has been exceptionally well maintained and was significantly redeveloped in 1999, 2006 and 2017.

The most recent refurbishment included a full rebranding and signage upgrade, comprehensive remedial and painting works, furniture and ambience upgrades, new centre management offices, CCTV and electrical upgrades and a range of premium fit outs for new and existing tenants.

Goddard says the refurbishment also saw Countdown consolidate its two strongly trading stores at opposite ends of level two into a single store, which has since been trading exceptionally well and is understood to be in the top 10 of Countdowns’ performing stores in New Zealand.

As part of the consolidation, an agreement was reached to lease the vacated supermarket space to Briscoes, one of New Zealand’s leading retailers.

Briscoes completed its first full month of trade in December 2017 and have consistently reported strong sales figures in 2018.

In addition, the Glenfield Night Market held in the centre car park has become a very popular weekly destination for the wider Glenfield community on Sunday evenings.

Goddard says investors will appreciate the chance to acquire a signature asset with solid investment metrics.

Glenfield Mall is being offered for sale by way of International Expressions of Interest, closing 31 October.